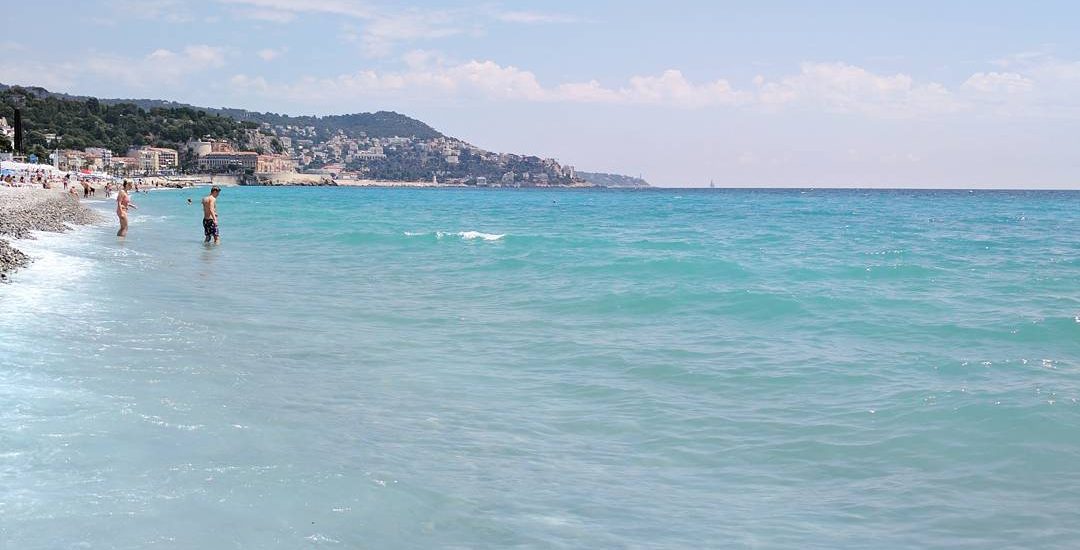 the beautiful coastline of the Côte d’Azur

Today was our first full day in Nice. We arrived by train yesterday afternoon from Milan, and by the time that we had made it to our hotel and got settled, the day was mostly behind us. So being that we were in France, and that we were both tired from a long day of traveling, we kept it simple. We picked up some brie, a baguette, a bottle of champagne and called it an early night. But today was a different story. After a good night’s rest, we woke up eager to explore Nice, to eat as much French food as possible, and to lay by the sea. And so we did. We spent the morning exploring the town, and the afternoon by the sea.

I woke up and said to Ryan that I wanted us to find the best bakery with the best croissants in all of Nice. And to make it happen in the next thirty minutes. While that might seem like a tall order to fill, when you are in France, there is a delicious looking and smelling bakery on just about every corner, so it’s really pretty easy. And on this sunny morning, we happened across a real gem, Boulangerie Jeannot. We gleefully enjoyed our hot and fresh out of the oven croissants on the most delightfully quiet street. A girl could really get used to this.

We haven’t done very much in Nice so far, but that was exactly the whole point. Our goals for our time here were basically to just relax by the sea, and today we really hit our stride with that. During our morning market run, we picked up some of the most delicious goodies to enjoy as a seaside picnic in between swimming and sunning – some local raspberries, two kinds of brie, a deliciously warm baguette, a few savory pastries, and of course a bottle of rosé. Life somehow seems so simple here. And perfect. Definitely no complaints.

In a sense, it’s kind of funny how much we’ve absolutely loved the beach here. Because really, it’s the most miserable beach that we have ever been to. But let me clarify. For picnicking it’s a dream because there is absolutely no sand blowing around. But for your own personal comfort? Well, there is none. Nope, no use trying to adjust yourself on those lumpy rocks. So we’ve been renting beach pads everyday (which seemingly do nothing), and then we try to give our tushies a break by going for a swim. (Which by the way, requires us to all but jump off of the rocks into the water, because there is no gradual slope.) But yes, somehow in spite of it all, not only are we enjoying the beach, it’s felt magical. Completely and utterly magical.

Tonight’s dinner really looks pretty simple. And I feel like yes, it is – just some stuffed vegetables, something that somewhat resembles a flatbread, and a couple of glasses of vin. But it’s that “flatbread” that is the complete star of the show. Like a couple of typical newbies I’m sure, we ordered just one plate. But we quickly learned that one plate just wasn’t going to cut it. No siree. There is most definitely a reason why people line up and wait for hours for the famous socca from Chez Pipo. It’s crispy. It’s soft. It’s savory. It’s the perfect vessel for just about anything. And both of us would happily eat our weight in it.

June 5, 2017 / inspired by our accommodations in Nice: Villa Otero

Today is our last day in Nice, and we both knew exactly how we wanted to spend it – with a picnic by the sea. It’s been pretty dang hot here all week (think upper 90°s), and the rocks are still as uncomfortable as ever. But we just can’t quit it. (The sea that is.) So after one more round of croissants, we walked over to the market to pick out our final day’s picnic fare – a baguette, some cherry tomatoes, fresh basil, black olives, a little pat of goat cheese, a savory stuffed eggplant, and of course some rosé. This week has truly been the life. Just the two of us sitting by the sea, with absolutely nothing to do, and nowhere to go.