Whenever we have company over, I try to make an effort to cook something different and a little more special than I would normally cook.  A few weeks ago, the weather was cool and rainy, and lasagne was really calling to me.  There was a recipe that my brother-in-law made for us once that was to die for, but I had only made it once since.  As I looked over the recipe, I kept thinking to myself, “why have I waited so long to make this again?  we looooove this recipe!”  So it was decided, lasagne for dinner. 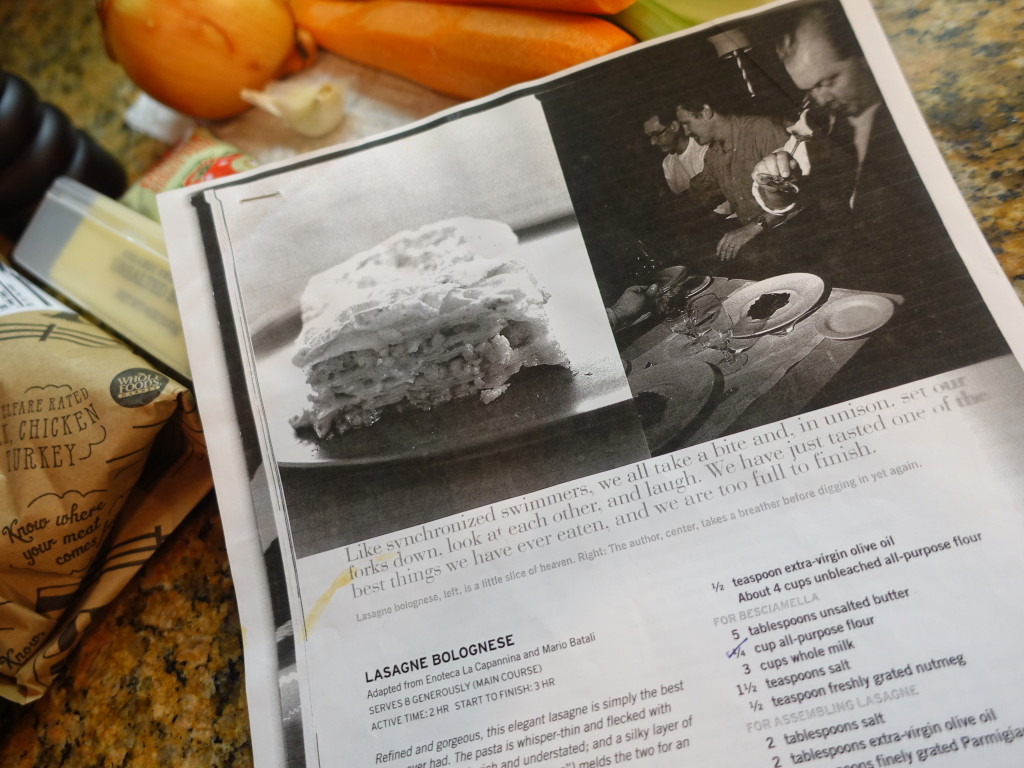 The recipe comes from Mario Batali, and it is whispery thin sheets of homemade spinach pasta with layers of besciamella and ragù – it is truly on a different level.  Batali even describes it as “an ethereal eating experience.”

The recipe suggests that  you can make (and it gets better with time) the ragù and besciamella ahead.  I couldn’t remember what I did the first time I made it, but I figured that it would be best to be prepared.  So I woke up early, prepped my ingredients, and I figured that I would have this baby knocked out in no time. 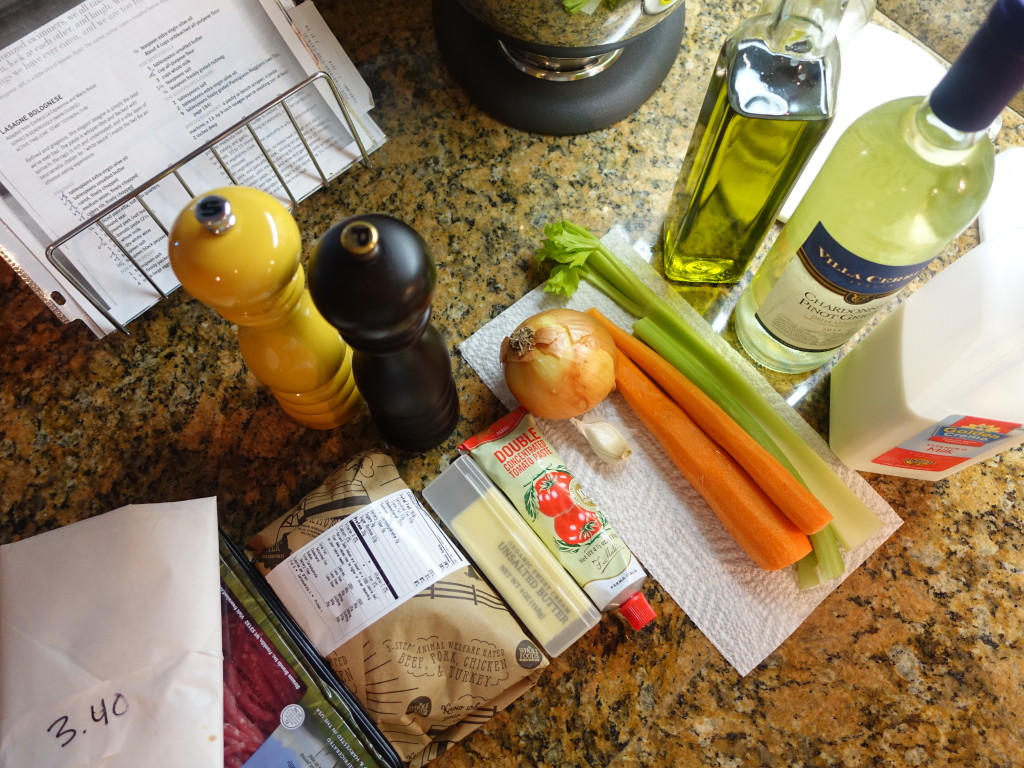 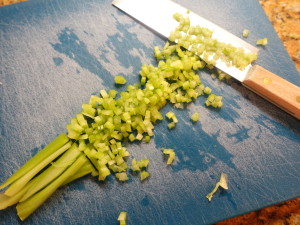 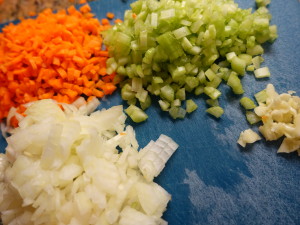 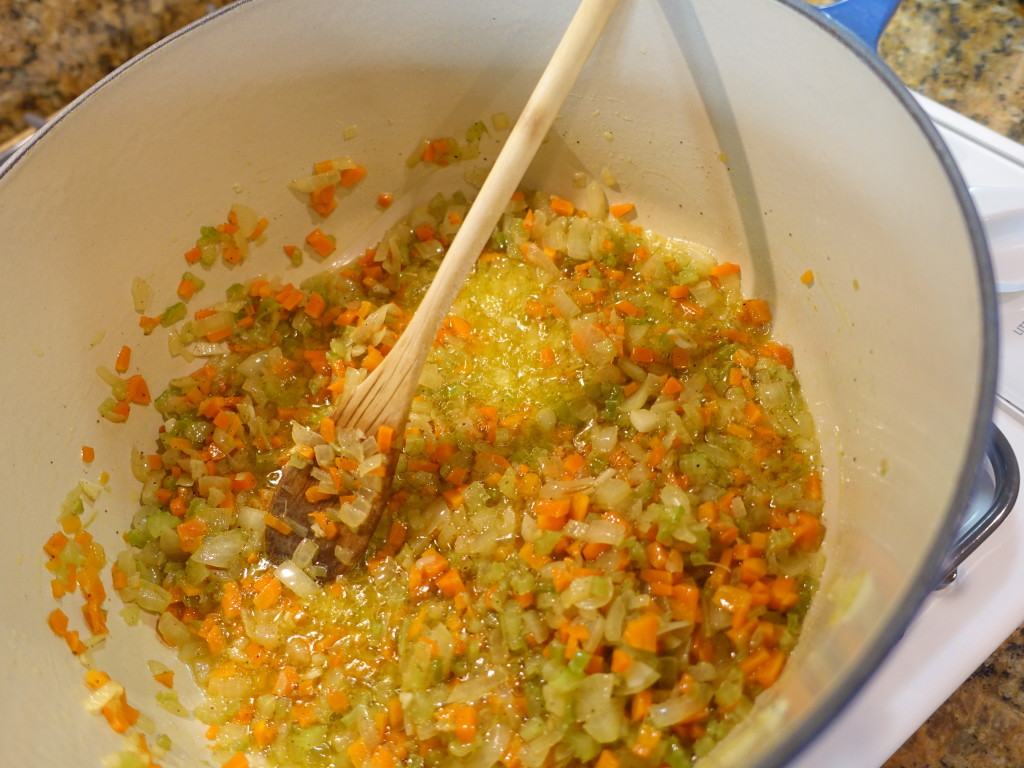 So things pretty much started to slow down right away.  I got my veggies chopped up in a jiffy, and Batali suggests that you can get them browned in 10-15 minutes.  Mine took more like 20-25.  No biggie, but I right away started to get the feeling that this was going to take longer than suspected.  After adding the meats and browning them, I added all of the liquids (wine and whole milk). 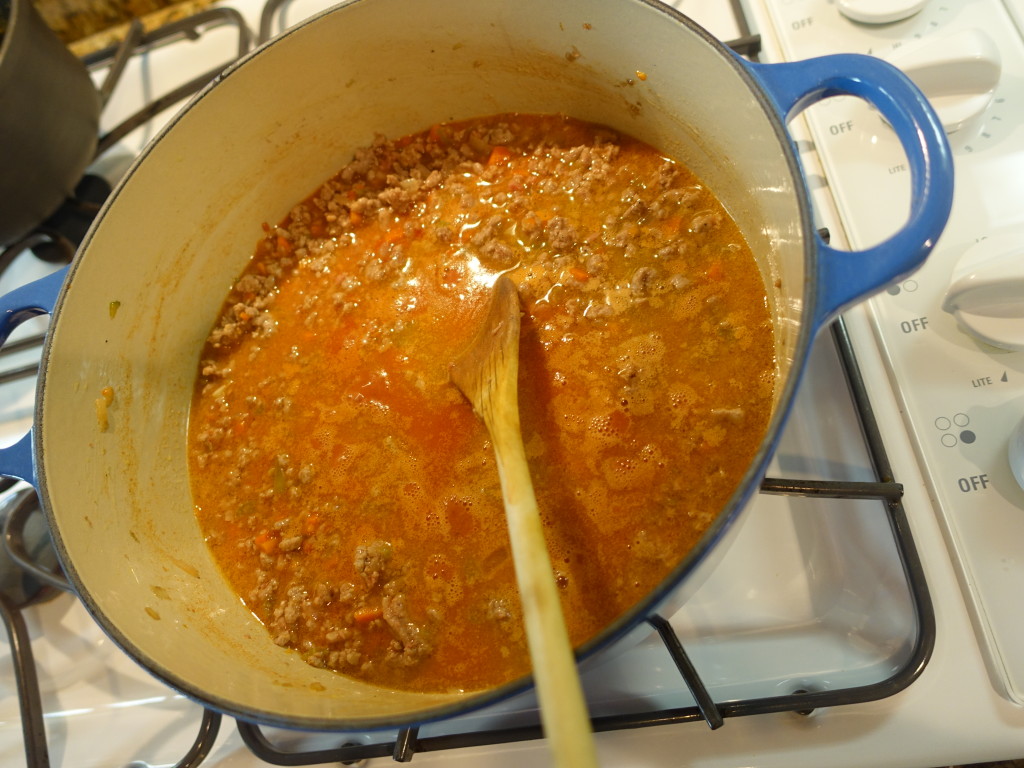 You want to let this baby cook down for about 1 1/2 hours.  Since I knew I had some time on my hands, I switched gears to prepare the besciamella, which was actually quite easy. 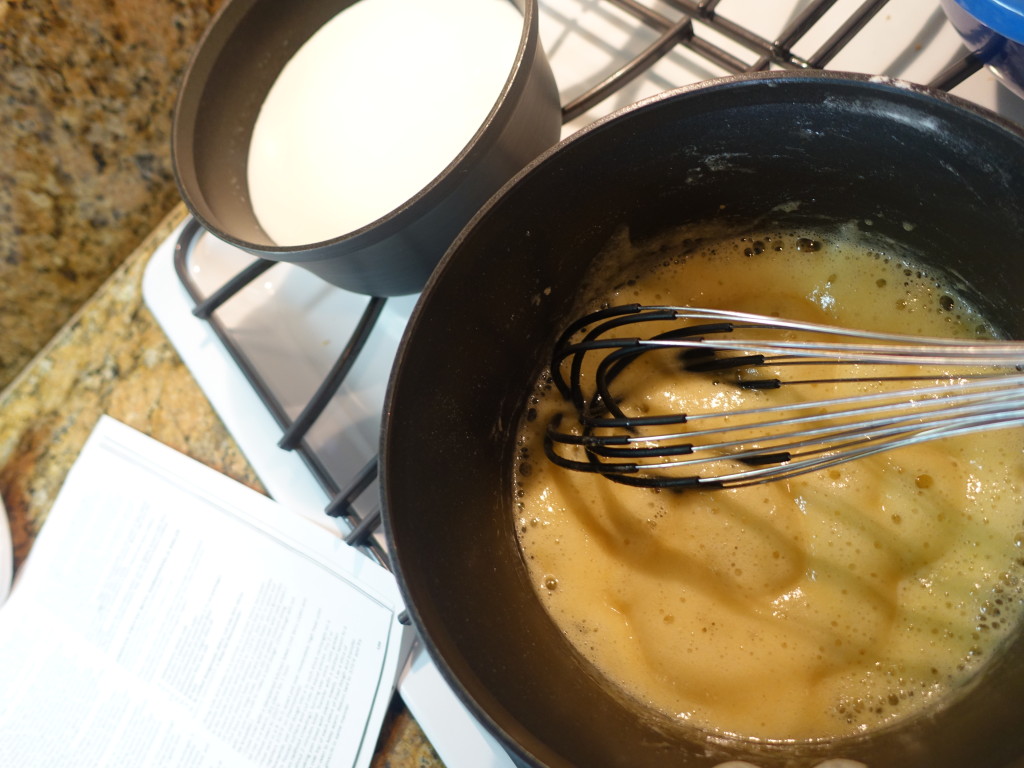 You basically just cook the flour with the butter, whisk in your hot milk, and presto, done!  So day 1 of the lasagne wasn’t too bad, but between prepping and cook times, I put in a good 2 1/2 hours.

Day 2 was the real beast, the homemade spinach pasta.  Normally I can whip out pasta like it’s my job, but for this, Batali is super specific about putting the pasta through each setting like 7-8 times; and that is after letting the pasta rest and first blanching and shocking the spinach, and then chopping it….you’re starting to get the picture. 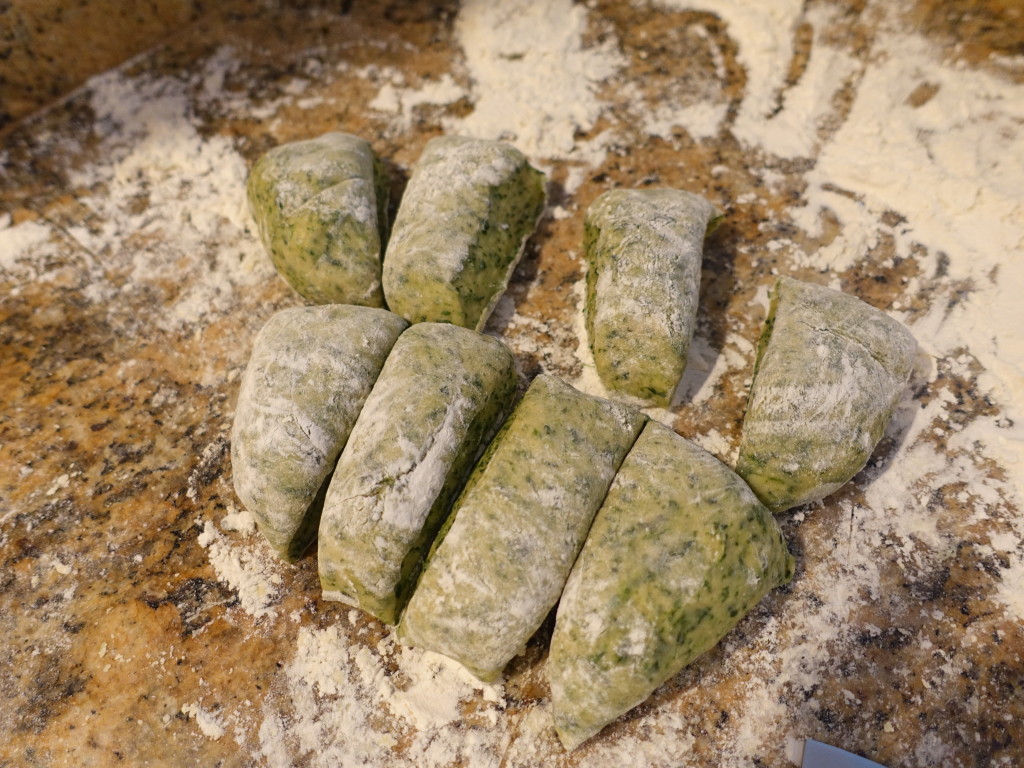 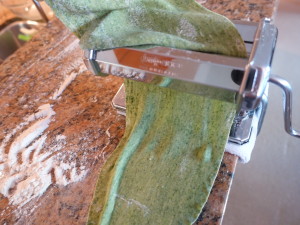 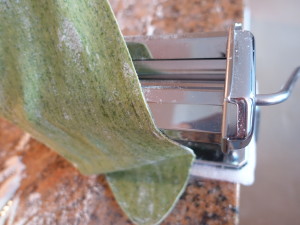 After you get the pasta rolled out, you let it sit for a few while you get your water boiling.  (Yep, you have to par-cook this pasta too).  If making the pasta seemed a bit tedious, then just get a hold of this next step.  After cutting the pasta, you cook it for exactly one minute, followed by blanching it for one minute, followed by patting it dry with a kitchen towel and then laying it out until assembly.  Additionally, Batali stresses that you can’t crowd the pot, so you can only cook 4 tiny pieces of pasta at a time – so basically you repeat this cooking step 10 times.  At this point, I had already made a huge mess in the kitchen with the pasta flour, but this step was about to take our kitchen into the disaster zone.

Clearly this is where I stopped taking pictures – my hands were covered in pasta, pasta water, ice water…a little bit of everything.  Luckily, the end was in sight.  This was really my last step before assembling.  Once I had all of my pasta prepped, I quickly assembled the lasagne and popped it in the fridge for a few hours before our guests arrived.  How much time did the pasta take?  Almost 3 hours, not to mention the extra hour after that, which I spent cutting the leftover pasta to dry and freeze (and another hour cleaning up).

About one hour before we were ready to eat, I popped the lasagne into the oven, and instantly the house started to smell sooo good.  I just kept praying that after almost 7 hours of work, that it would please turn out. 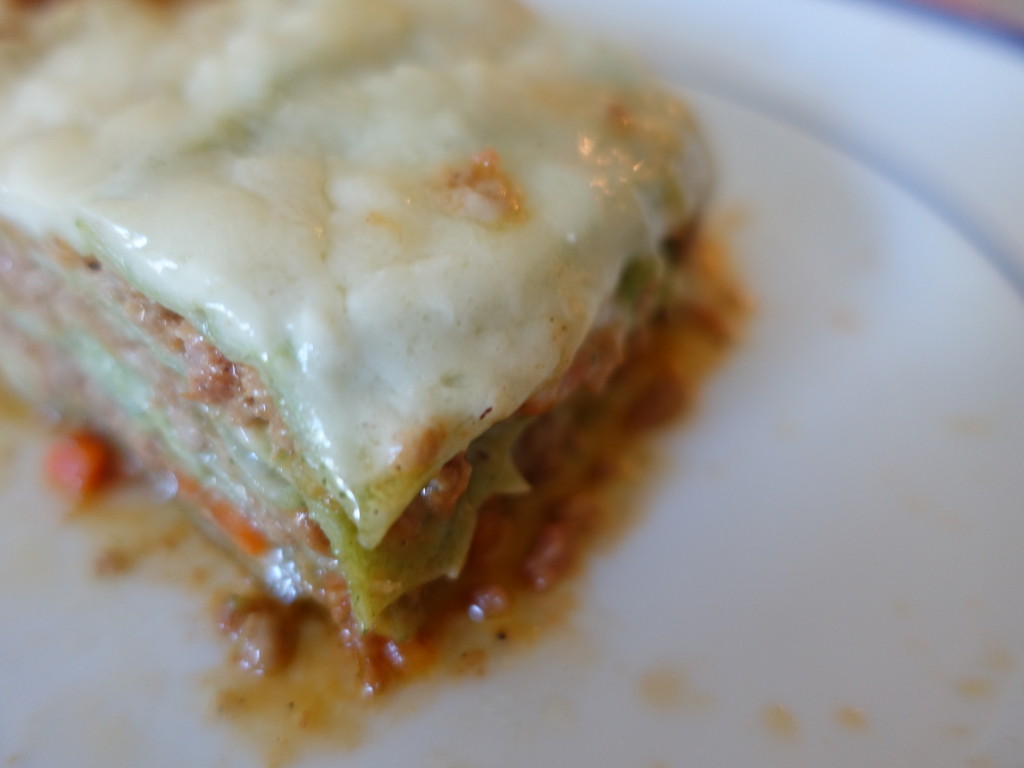 The lasagne was as good as I remembered, if not better, and honestly, worth every single minute.  It was delicate, fluffy, creamy, salty…everything you want a lasagne to be.  It comforted us and warmed our tummies, it was perfection. 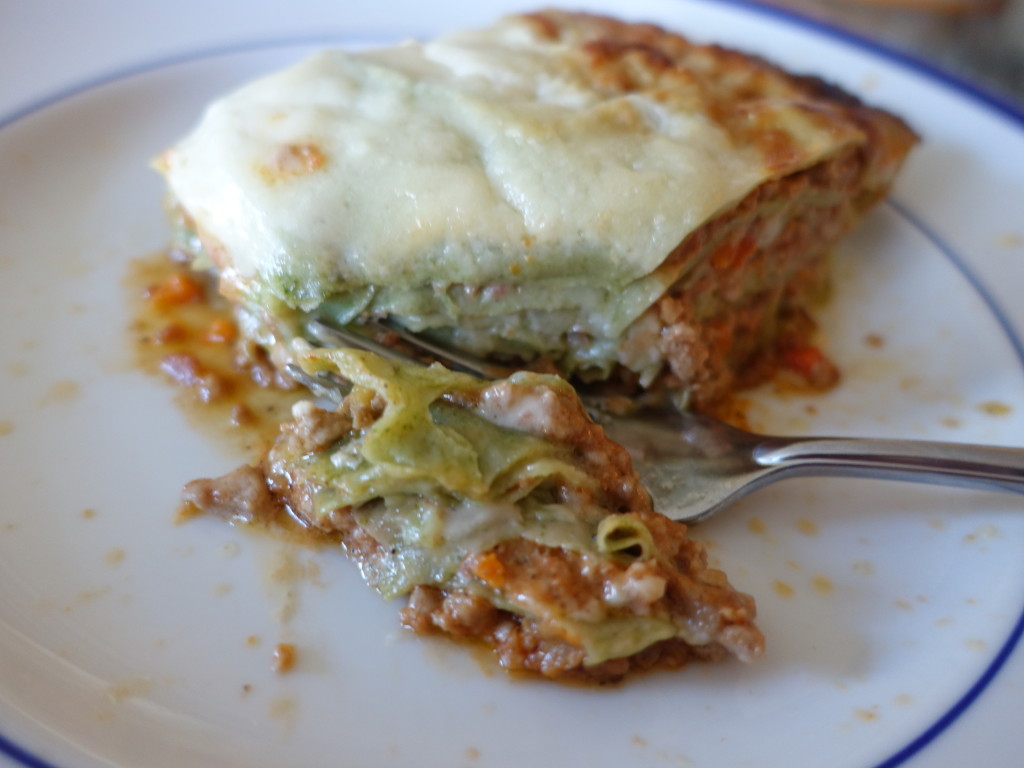 So after all of the mild complaining (sorry complaint restraint!) about how long it took to make, would I make it again?  Heck yes!  But, it’ll probably be a few years.  The hubby and I figured that this recipe requires a mental resting period – you almost have to forget how much work it takes to want to make it again.

After our friends left, we were laughing about how long it took to make this, so we took a look back at the recipe to see what the “active cook time” was.  Survey says: 3 hours start to finish!  My husband suggested that that probably is the case in a restaurant kitchen where everyone is doing something different to make it come together quickly. 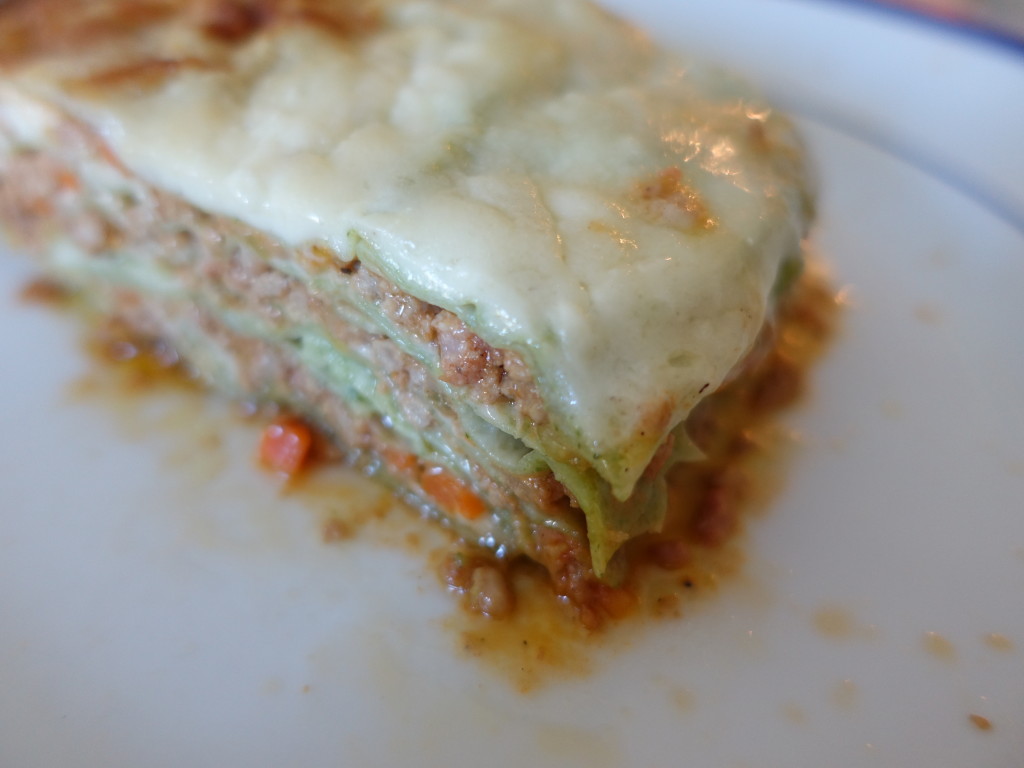 Either way, this lasagne is dreamy.  In fact looking at these pictures almost makes me want to make it again.  I don’t think it will be years until our next taste, but I’m definitely taking the month off :)